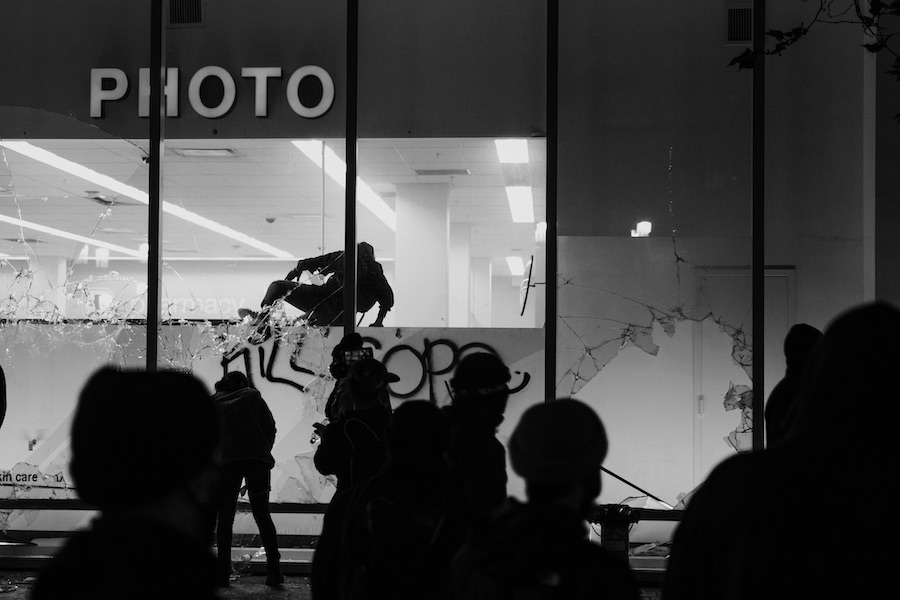 It is in my interest to follow the law by abstaining from stealing from others, for example, because others will not steal from me. The law enforces this, such that, if someone does steal from me anyway, then she will be punished and, if possible, my property will be returned to me. This is, roughly speaking, the way the social contract, as expressed by many many western philosophers, is to function. We give up certain freedoms (my freedom to acquire the property of someone else by force) in exchange for certain protections (the security of my property) that are enforced by the state.

But what if the law is not equally enforced? What if, for some groups of people, they do not receive the protection of the law, despite their abiding by it? What if, in other words, the social contract is breached, in that the enforcers of the law do not deliver its protections?

In such a state of affairs, I believe that looting and other forms of unlawful behavior can be understood in two ways when they are committed by members of groups whose rights are not being protected. First, they could be understood as expressions of civil disobedience whose intent is to produce political reform. In America, there is a long history of political movements that have successfully leveraged this strategy. Notable examples include the well-known stories of the Boston Tea Party, Susan B. Anthony, and Rosa Parks—all of these cases involved the purposeful breaking of the law to make a political point.

Understood in this way, I condemn looting not because it is philosophically unsound, but rather because it is strategically ineffective. There are other, more deliberate forms of civil disobedience—such as those mentioned above, which I do not condemn—that effectively persuade onlookers to take up the cause of reform and which are not susceptible to the objections of anarchy and nihilism that looting is.1

The second way that looting may be understood is that it is a natural outcome of a broken social contract. If the agreement of the social contact is not being upheld, then those who are not being protected by the law have little incentive to follow the law. For example, if the enforcers of the law allow my home to be repeatedly burglarized and do not protect my life or the lives of my children, then the law is not a protective force, but an oppressive one. Under such conditions, I should be interested in securing my life and property only by my own hand and I should feel little compunction, under such conditions, in transgressing the law to benefit myself when I can get away with it.

Understood in this second way, I condemn looting as well. Again, I do not do so because it is philosophically unsound; I do so because, in such a situation in which the social contract is breached, looting is a more-or-less aimless act that accepts and exploits the status quo instead of trying to ameliorate it. It is like looking away from wrongdoing to save oneself the time and trouble rather than doing one's duty to confront the wrongdoer.

But what if reform is not feasible? If reform is truly not feasible, then the argument for my condemning looting understood in the second way does not stand. It does not stand because it would not be possible to ameliorate the situation and it is not fair to condemn people for failing to do what is impossible. In such a state of affairs, in which the social contract is broken but reform is not possible, then looting would be destructive and poisonous to the society in which it occurs. But it would also be a reflection, under such circumstances, of the destructive and poisonous nature of such a society that does not equally uphold the agreement of its social contract.

Thanks to John Banks for comments on an earlier draft.

1. One may think that I contradict myself by condemning looting generally but not condeming the Boston Tea Party riots. I think these cases can be distinguished. I define looting as the stealing goods of whatever kind such that they can be used later. According to this definition, the Boston Tea Party riots did not primarily involve looting. They involved vandalism and destruction of property. The point, so far as I understand, was not to steal English tea for oneself to use later, but rather to destroy the tea in order to make a political statement.